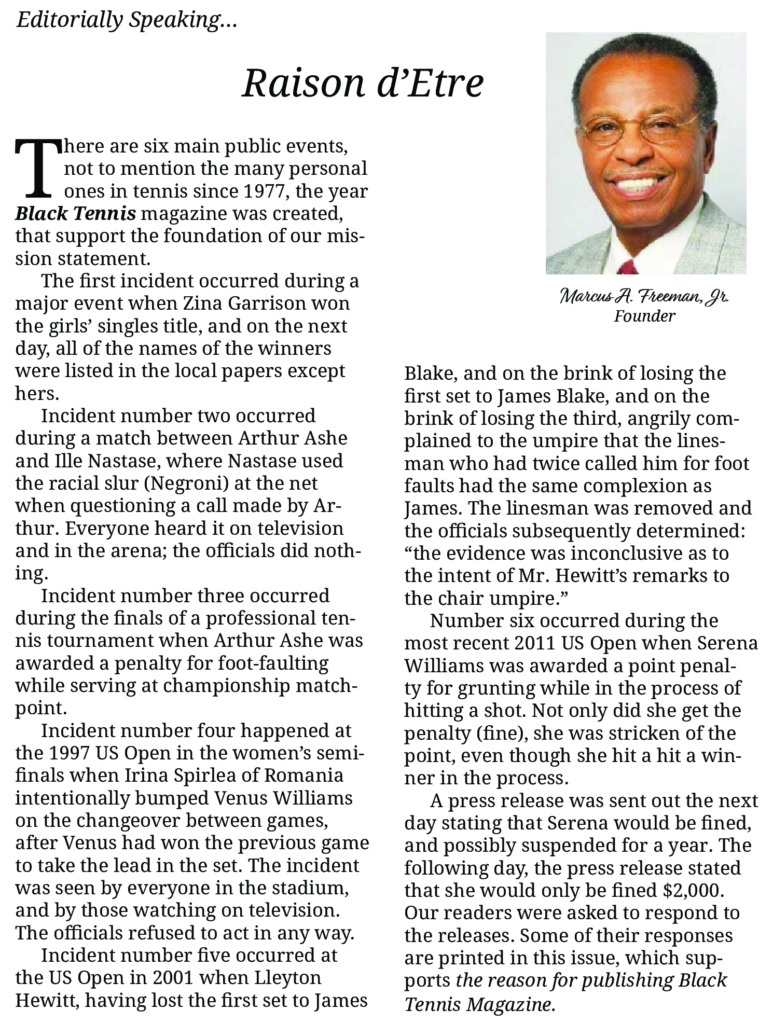 The mission of Black Tennis Magazine is to unite the global black tennis community in this modern era of real-time media and digital communication.

Marcus A. Freeman, Jr. founded and published Black Tennis Magazine in 1977 which soon became the most successful black tennis magazine in history. This publication has covered many of the most important events and people in modern black tennis history. Freeman spent much of his career as a school teacher and administrator. However, late in his career, Freeman became a full-time tennis teaching professional in Dallas, Texas. When asked what prompted him to publish Black Tennis Magazine, Freeman stated “one major tournament in the state of Texas was won by a couple of black youngsters who were victorious in both singles and doubles, but received no coverage in the media.

It appeared at the time that the news media intentionally omitted the names of these black youngsters because of their race. This led me to conclude that this type of racial discrimination occurred throughout the United States. This discovery convinced me to create Black Tennis Magazine to correct this wrong.”

Freeman achieved his mission of creating a magazine that filled an information void in black tennis. The magazine has been the leading source of information about black tennis - providing all original content. The first edition of Black Tennis Magazine was focused on covering major tournaments in Texas and the Southwest region of the United States. The magazine was initially an 8 page publication in newspaper format that primarily covered players in the Southwest Athletic Conference (SWAC) which was composed of Prairie View A&M University, Texas Southern University, Southern University, Alcorn A&M and Mississippi Valley State University.

Freeman later decided to highlight black tennis players who had the potential to succeed in the predominantly white USTA tournaments. He was therefore able to publish stories about many of the most promising young black players in public schools, colleges and universities.

​Starting with the coverage of the ATA National Championships in New Orleans, Louisiana in 1977, the magazine had interesting stories of the most prominent people in black tennis throughout the United States. Some of the players that were profiled in early editions of Black Tennis Magazine included: Althea Gibson, Arthur Ashe, Zina Garrison, Leslie Allen, Lori McNeal, John Lucas, John Wilkerson, Benny Sims, Terence Jackson, Cedric Loeb, and Herbert Provost.

​In 2000 the magazine became a 32 page publication and added legendary tennis teaching professional Vic Braden to its staff. This change made the publication more popular than ever. It included sections on general tennis news, pro tennis, instruction, college tennis, the ATA and junior development. The 2013 edition of Black Tennis Magazine featured the First Lady of the United States Michelle Obama and described her efforts to influence more Americans to adopt a healthy lifestyle which included playing lifelong sports like tennis. This 104 page issue was the largest ever produced. Thanks to Freeman’s efforts, the world has a written record of many of the most important stories in black tennis in the last 50 years.

​Freeman's sudden death in September 2016 brought about opportunity for the black tennis community to maintain the legacy that has been built over almost half a century. During his tenure, Freeman faithfully printed the magazine to avid readership while utilizing antiquated direct mail processing, however industry and technology has developed significantly over the last few years. As such, Freeman was in the process of modernizing his publication prior to his death, but did not have the strength to carry it out due to his sudden and severe illness.

​The publication was revitalized in 2017 under new ownership and management to ensure that Freeman's vision and mission of spreading the good news of black tennis was done in the most effective and efficient manner possible while keeping its original name, "Black Tennis Magazine." The magazine has now transitioned from a printed quarterly paid subscription via direct mail distribution to a real-time online interactive news source available at blacktennismagazine.com.

​Curious news and current events in elite sports will be primarily covered by the magazine as it establishes itself as a leader within this newly formed media segment; however local events, achievements and other newsworthy activity can be submitted to the Editorial Team directly. Once approved, a Black Tennis Magazine team member will contact correspondents regarding their online submissions. While the organization remains independent and self-sustaining, readership support is very much appreciated as current ownership moves forward to continue the legacy of excellence in black tennis that Freeman founded in 1977.