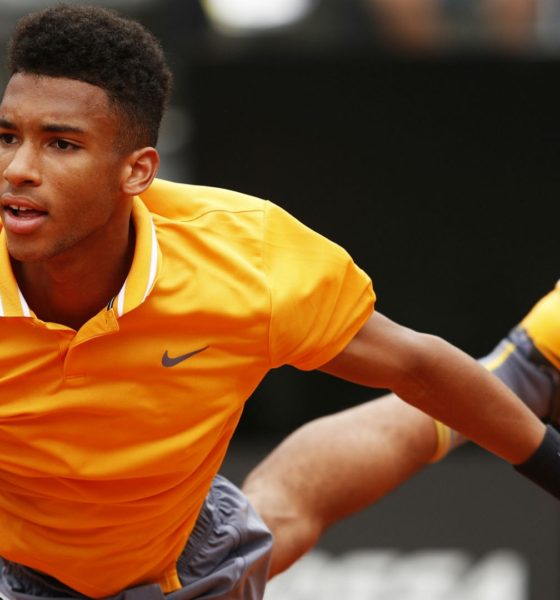 Felix to face “the showman” Brown in Stuttgart Quarters

The French Open is in the rearview mirror for the pro tour and grass court play has begun in Europe. Felix Aguer-Aliassime is getting off to a quick start in Stuttgart this week at the Mercedes Cup with a big win against a former top 10 tour player, Gilles Simon.

The match was a display of power and perfect form as Felix was able to win 79% of his first serve points in addition to throwing in 15 aces, easily defeating Gilles 7-5, 6-4.

It seemed like Felix was in full stride with big forehand winners while driving backhands into the open court. Felix is making his way into the net more by following his huge serve which seems to be deadly on the faster grass surface.

With the win today Felix must now contend with the super-talented Dustin Brown in the quarterfinal round. Dustin had a much tougher opponent in the R16 against number one seed Alexander Zverev.

Dustin got off to a great start with an early break and first set win to put himself in position to receive a match point in the second set. Dustin was able to run Alex north to south in an unorthodox style of play to edge out the win decisively in the third set winning 6-4, 6-7, 6-3.

Up next should be a classic match between a power player and a finesse player. Felix should be able to run down the north-south patterns and make Dustin pay for opening up the court.

Dustin must cut down on unforced errors at the baseline and attack the net on every occasion. Dustin has such a natural serve and volley game on grass; this should benefit him as he plays more warm-up tournaments leading up to Wimbledon.

Felix is blazing the ATP Tour and seems fresh after withdrawing from the French Open due to injury. Players, including Rafa Nadal, are taking notice of the 18 year old from Canada.

With a likely win here, Felix would make his fourth semi-final appearance this season and possibly his first big ATP Tour 250 title win of his career. Ranked #21 in world doesn’t hurt either as he comes into Wimbledon as a seeded favorite.

Felix stated in regards to his chances here in Stuttgart,

“I still have a lot of things to learn on this surface, moving, coming forward, mixing shots, but it is all positive at the moment. I’m still chasing my first title and it would be cool to grab it here in Stuttgart or later this year.”