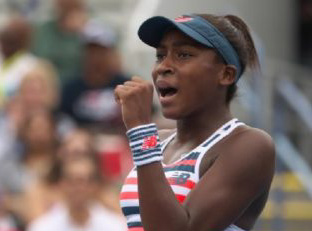 In a modern day battle of the generations, Cori Gauff meets Taylor Townsend in the quarterfinals of the W100 Charleston tournament after easily defeating two Top-150 players in straight sets.

This marks Cori’s best pro tournament result to date. With no wild card credit, she was able to spin through the qualifying rounds and do major damage in the main draw this week.

Taylor, now 23, must face the young ambitious 15 year old during a time when Taylor is showing signs of desperation for a breakthrough on the WTA.

Struggling to make headway in the Premier and Grand Slam level events, Taylor hopes to get a much needed title win here at the LTP Pro in Charleston, SC.

The major headwind for Taylor and similar vintage players is the upcoming American teenage talent by the likes of Emma Navarro, Whitney Osuigwe, Caty McNally, Hailey Baptiste, Caty Volynets and her next opponent – Cori Gauff.

The match should be phenomenal as both players have an opportunity to ascend in the wildcard race to the French Open. A main draw appearance is worth over $75,000 plus the experience to improve while playing against the best talent.

Taylor has the advantage due to her seasoned tour experience, however Cori is playing lights-out with tons of confidence flowing into this match.

Keys for victory seem easy enough on paper, but when on center court the balls seem heavier and the lines appear narrower by the minute. Cori has to keep her first serve in play as Taylor tends to be on the attack when second serves are kicked in play. Given the clay surface, Taylor can afford to slow down points and extend rallies which could swing to her advantage.

Cori is no stranger to the big stage given her recent appearances in the 2019 Miami Open and last year’s US Open qualifying. If Cori is able to play her power game put a cap on errors she could walk away with her biggest pro win so far this season and maybe the title this weekend.

Whitney and Emma are also in the quarterfinals and play tomorrow in the following rounds.

This match can be seen live tomorrow, Friday at 11am EST on the ITF Tennis website.