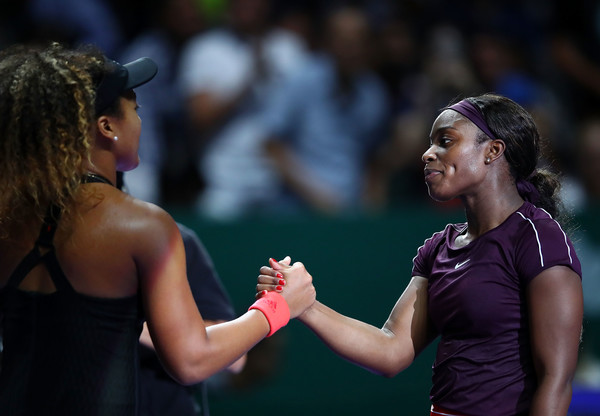 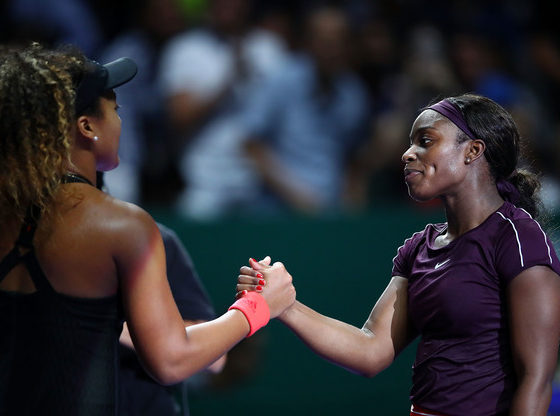 Sloane Stephens had a tough go at it on court following her recent US Open straight set quarterfinal upset against Anastasija Sevastova and a mid-match confrontation with Anastasia Pavlyuchenkova where she was able to pull out a victory 6-4 in the third set. Sloane would later go away quietly in the first round of the Kremlin Cup, but things began to turn for her in the WTA Finals held in Singapore Indoor Stadium.

Sloane has the rare ability to raise her level of play during big matches and turn around extended losing streaks while facing top ranked opponents. This was on full display as she was able to be patient while keeping her composure to pull out a close win in the WTA Finals against the red hot Naomi Osaka 7-5, 4-6, 6-1 in the Red Group stage.

Naomi has been trailblazing the globe since her 2018 US Open win so exhaustion may have played a role in some of her results, but she has been able to reel in some good wins with a finals appearance in the Pan Pacific Open and making the semifinal round in China Open before losing to Anastasija Sevastova 6-4, 6-4.

After the match Sloane was very excited to have pieced together a great while also eager to face Kiki Bertens in the next round.

“No, I kept playing positive and strong,” the world number six told reporters of Sloane’s approach to the deciding set of their Red Group round robin opener.

“I mean, I didn’t play bad in the second. Just kind of got away from me. I tried to regroup as best I could and played just like I was playing before.

“I thought I played a really good match. I played solid from start to finish. Obviously playing someone with a lot of confidence is always a tough task, but I think that I played well and I kept a good attitude. So I was pleased with that.”

Stephens, who won the 2017 U.S. Open after spending 11 months out with a foot injury, said she could sympathize with Osaka after the 21-year-old complained of exhaustion in her two tournament appearances since last month’s triumph in New York.

“Yeah, I mean, I can definitely relate. After the U.S. Open I probably shouldn’t have played the entire rest of the season, because I was so exhausted,” Stephens said.

“I think our situations are a little different. I played like four tournaments after not having played for 11 months, so I was probably more tired than she was.

“But I think I totally understand, and I think that to go play at home in Tokyo was really important for her or her fans, for her country. You can only applaud that,” The American added of Osaka’s run to the Pan Pacific Open final.

“But definitely can relate on being tired and needing to regroup and play — you know, I think she took the next week off.

“She did what was best for her. But I think obviously playing in your home country the only tournament of the year I think is important, and I thought that she did a great job.”