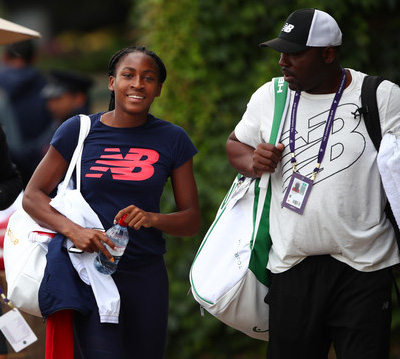 Cori “CoCo” Gauff is becoming a torchbearing world tennis superstar in a short stint after ascending to R16 in the Wimbledon Championships. She represents talented teenagers with big ambition who may not fit the mold.

The stardom hasn’t completely gone to her head, but rather she has used it to boost her confidence in being able to withstand the heat from some of the WTA Tour’s most talented players.

Simona Halep deflated an eager CoCo and ultimately went on to win the title in a commanding fashion over Serena in the final. Cori had her chances in the match, but the shear power and point duration could not be matched, at least not last week.

Every week Cori seems to be able to “next level” her game and rise above the competition. With a current top 175 WTA  ranking, Cori is now able to qualify for larger events that her own team may not have anticipated earlier this month.

Her next challenge is the Citi Open where she is projected to earn a qualifying spot. She’ll definitely need the matchplay as she is preparing for an inevitable appearance in New York later next month at the US Open.

Uncertainty continues to plague the Gauff camp as current WTA rules may not allow her to play in her 7th WTA event (after she was granted 2 additional events). The US Open officials have already bumped the rulebook in effort to bring her aboard the main draw in August.

Due to the crazy frenzy over the 15 year old phenom the US Open has declared it impractical for such a rising star to be limited to play only qualifying rounds or exhibitions. From a business perspective the USTA wants paying fans and TV coverage that preliminary/exhibition matches can’t accommodate.

Pushing the limits of a teanage pro schedule, Cori can only do her best to compete against the world’s best. At this time, only the the WTA can keep Gauff away from fulfilling her full potential.

Granting additional matches and bending existing rules may not sit well with others who have suffered greatly. Whitney Osuigwe is one example of a teenage professional who struggles with scheduling tournaments.

Whitney (age 17) has limited access to WTA events as she is now seems restricted to only playing ITF events where she usually reaches the semifinals and has won three ITF titles since turning pro just last year. It seems as if she’s bored with playing these smaller low-ranked events. It is also evident that she has suffered going into grand slam events without WTA Tour match play throughout the season.

For now, rising teenage stars on tour may grapple over tournament starts, but if Cori can prove that she can handle the workload and become successful on a consistent basis, the WTA Tour may relax the rules to accommodate overly ambitious teens looking to make a pro transition.